The Royal Collection in Windsor Castle contains a drawing (RL 12983) showing the interior of a picture gallery that bears a striking resemblance to the Linder Gallery, showing a similar architectural space. There are some key differences though. For example, the ceiling of the space in the Windsor drawing is flat, and there is a door on the left hand side. The sculpture and astronomical instruments in the drawing appear different from those in the painting. 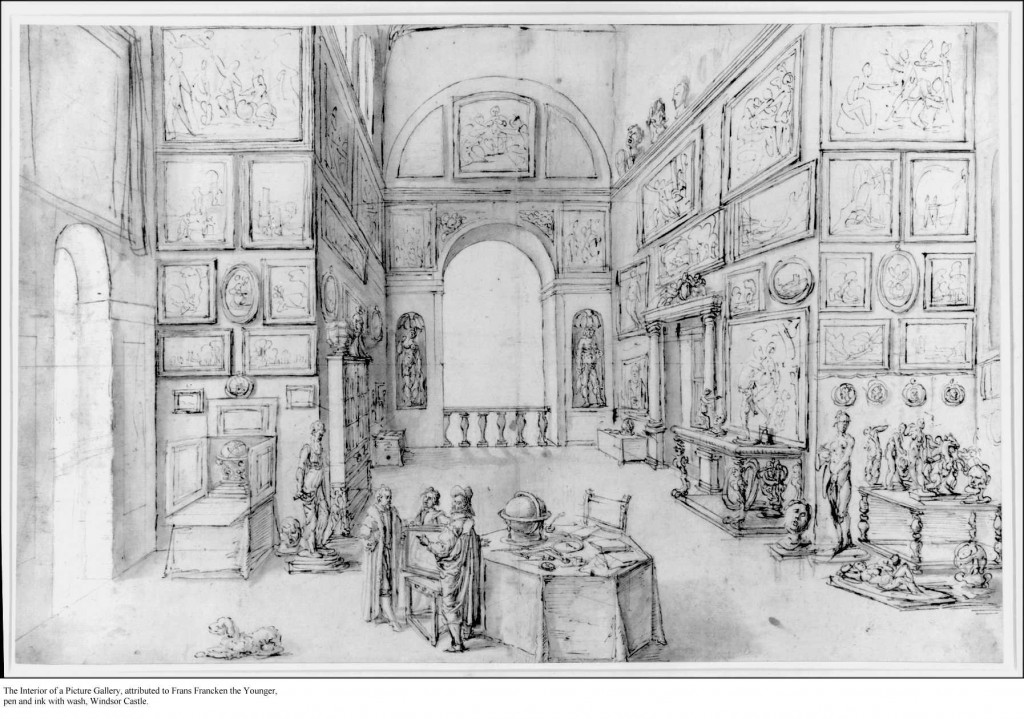 Perhaps the most intriguing difference between the drawing and the painting is that the drawing shows a more conventional grouping of three connoisseurs in conversation instead of the allegorical figures shown in the painting. Could this be the preparatory drawing on which the painting was based?

There are several reasons to think so. For one thing, several of the paintings shown on the walls in the drawing appear to be rough compositional sketches for the paintings shown in the painting. For example if you look at the sketch of the Nymphs and Satyrs in the upper left of the drawing you see a nymph in the centre reaching  up with her right arm, and a satyr reaching down, whereas in the finished painting there is a nymph in the left foreground reaching up with her left arm. Similarly in the sketch for Belshazaar’s Feast, one sees King Belshazzar seated on the left, with servants bringing exotic foods including a peacock pie. In the finished painting the peacock pie is already on the table. 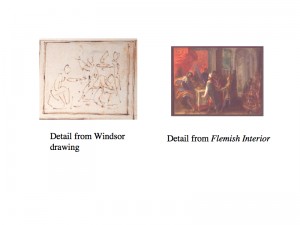 Comparison of Belshazzar's Feast in drawing and painting

This suggests that the sketches in the drawings are quick compositional sketches for the final paintings. It also suggests that the paintings on the walls of the Linder Gallery are not copies of real works but original compositions in the style of well known Flemish, Dutch and Italian artists of the time (if you were copying an existing painting, surely you wouldn’t change the composition?). 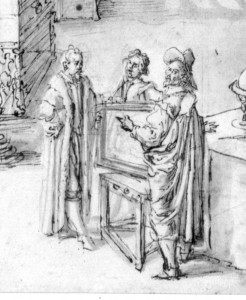 Another interesting feature of the Windsor drawings is the three conversing figures. The book A Mysterious Masterpiece contains a suggestion as to their possible identity. The figure on the right is identified as Antwerp’s most famous painter, Peter Paul Rubens. The figure on the left is identified as Peter Linder, the German merchant who was the patron of the Linder Gallery, and it is suggested that the central figure is Anthony van Dyck, who worked in Rubens’ studio. It is possible that the Windsor drawing was created to memorialize a visit Linder made to Antwerp, during which he met Rubens, van Dyck and the painter (still unknown) of the Linder Gallery.