The Perpetuum Mobile, a machine which can just be made out in the shadowy right background of the Linder Gallery (no. 43 in the zoomable image), is not the only invention of Cornelis Drebbel (1572-1633), nor perhaps even the most significant, but it is certainly the one for which he was best known by his contemporaries, and the one of which he remained most proud. It is also the instrument about which most has been written – both by his contemporaries and by modern scholars. First demonstrated in late 1604, the fame of Drebbel and his Perpetuum Mobile spread rapidly, and the Perpetuum Mobile was still being cited as late as the 19th century, long after Drebbel himself had passed into obscurity. 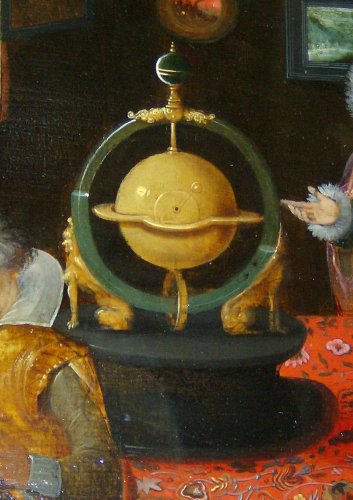 Cornelis Drebbel's Perpetuum Mobile, detail from Hieronymus Francken the Younger, The Archdukes Albert and Isabella Visiting a Collector's Cabinet, The Walters Art Museum, Baltimore. Compare the shadowy device at no. 43 in the zoomable image of the Linder Gallery

By all accounts, Drebbel’s instrument combined two features, first, a self-winding astronomical almanac showing the date and the phases of the moon, and second, a cylindrical ring in which water moved endlessly to and fro. Even if the Perpetuum Mobile was only a simple air thermoscope (relying on temperature changes), or at best a crude baroscope (subject to changes in air pressure), Drebbel invested it with great mystery and great value, and saw it as a confirmation of the principles he elaborated in his Ein Kurßer Tractat von der Natur Der Elementen first published in 1608. Although clearly his claim was unfounded, perhaps we at least to try to understand what he thought he was doing when he speaks of the instrument’s secret as ‘the fiery spirit of the air’. Perhaps the glass cylinder was filled not with mere air, but with oxygen produced by heating saltpetre, or nitre, which Drebbel was convinced held the secret to chemical transformations of many kinds. As Jennifer Drake-Brockman astutely observes, Drebbel stands on the threshold between two ways of looking at the natural world. As she writes ‘On the one hand, were those philosophers, including Drebbel himself, who explained the machine in mystical or alchemical terms, and whose mind-set might be described as the Rosicrucian tendency; their thinking was ultimately grounded in the Aristotelian universe, the building blocks of which were the four elements. On the other hand, were the exponents of the scientific tendency, whose efforts were directed towards an understanding of observed physical phenomena and to whom the Aristotelian worldview was increasingly an irrelevance; […]’. Drebbel’s alchemy was indeed Aristotelian, and he accorded nitre a special significance as part of Paracelsus’s tria prima of Mercury, Sulfur and Salt, hence his experiments with cooling, underwater travel, explosives and of course, the Perpetuum Mobile.