There is no signature on the Linder Gallery, but on the red table on the right hand side of the painting is a small double-portrait. The portrait shows two men, a bearded man pointing at a drawing and the other, younger man looking at the drawing and painting. On close inspection of the drawing it can be seen that it represents the perspective scheme of the whole painting, so it is highly likely that the man on the right is the artist himself. 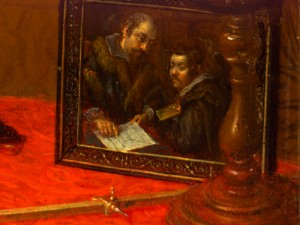 Another double-portrait exists which is strikingly similar to this one, carried out by the Milanese painter Daniele Crespi, showing a lesson about burning mirrors. An interesting thing to notice is that the mirror and the beam compass present in the Crespi painting are also in the Linder Gallery, and the balding, bearded man in both paintings can be identified as German merchant Peter Linder, whose coat-of-arms is on the window in the upper-left of the Linder Gallery. The other man in the Crespi painting can be identified as Urbino mathematician Muzio Oddi, who taught Linder mathematics and was also a key figure in devising the intellectual programme of the Linder Gallery painting.

But who is the artist? Various hypotheses have been put forward for who the artist might be. Jan Brueghel the Elder might be an obvious candidate on stylistic grounds, and did many paintings on commission for Cardinal Federico Borromeo in Milan.

However, there are a couple of issues with the theory that Jan Brueghel the Elder was the lead artist:

1)    the painting is highly likely to have been completed after 1627 (the date of publication of Kepler’s Rudolphine Tables, present in the painting on the green octagonal table, and one of the medals present on the octagonal table was only made in 1627). Jan Brueghel the Elder died in 1625.

2)    Jan Brueghel the Elder didn’t look anything like the artist in the double-portrait (he was older and had a gaunt face).

Jan Brueghel the Younger, son of Jan the Elder, was in Milan, where the painting was almost certainly commissioned, in the 1620s and was of a similar age to the artist represented in the double-portrait. However we haven’t yet found a portrait of him to compare this with. Stylistically, he was not as accomplished as his father and it seems unlikely that he could have carried off such a painting in his youth. There are a few other Flemish artists who painted works of this kind, and works like this were often collaborative efforts, but it really is surprisingly hard to pin down the artist of the Linder Gallery.