At the front of the green octagonal table in the Linder Gallery, very prominently positioned in the painting, is a scrap of paper bearing three competing systems of the universe: the Ptolemaic earth-centred system at the top left, the sun-centred Copernican system (prohibited by the Inquisition since 1616) and the compromise system of the Danish astronomer, Kepler’s mentor Tycho Brahe, which has the inner planets going around the sun but the sun and the outer planets orbiting around the earth. 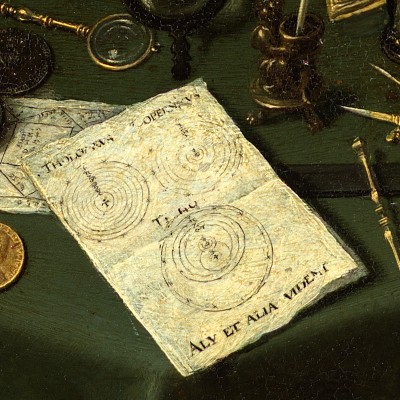 At the base of this piece of paper in tiny but very precise writing are the Latin words “ALY ET ALIA VIDENT” meaning “Others see it yet otherwise”, suggesting that the three systems presented here are not exhaustive. Could this be a reference to Johannes Kepler who proposed that the planets orbit the sun in elliptical paths, did not believe Tycho’s system was physically plausible and abandoned Copernicus’s solid crystalline spheres? Behind the diagram of the cosmic systems is an astrological geniture for an as yet unidentified person born in the month of March. Perhaps the artist is suggesting the extremely close link between astronomy and astrology in the seventeenth century —  Tycho Brahe and Kepler both earned income from casting horoscopes.

It is interesting that ALY ET ALIA VIDENT is such a central phrase to the painting, almost like a caption — Others see it yet otherwise — the universe is amenable to different forms of interpretation. This is a strikingly casual stance for the period just a few years prior to Galileo’s Inquisition trial for Copernicanism. References to Galileo’s telescopic discoveries, incidentally, are surprisingly absent from the Linder Gallery, here we seem to be much more in the realm of precision measurement.

ALY ET ALIA VIDENT. What is behind this intriguing phrase? Could it be an oblique reference to Kepler? Or is it just a lack of cosmic committment? Given its prominence in the painting, could it be a suggestion that the painting itself is open to radically different forms of interpretation, or is that just a 21st century way of reading too much into a scrap of painted paper?

Again, this drawing seems to relate to the frontispiece of Kepler’s Rudolphine Tables, the book present on the green table, where we behold the Temple of Urania, muse of astronomy, inhabited by great astronomers of the past. Tycho Brahe points at the ceiling which is marked with his own cosmic system, asking the words “Quid si sic?” — “What if it is like that?”. Kepler himself is not included in the temple but sits in the base, looking at an architect’s model as the “humble” architect of a new edifice of astronomy. Another puzzle: given that the painting is all about measurement, geometry and perspective and their relationship with the arts, why is the perspective of the octagonal green table itself so wonky, apparently tilting forward? 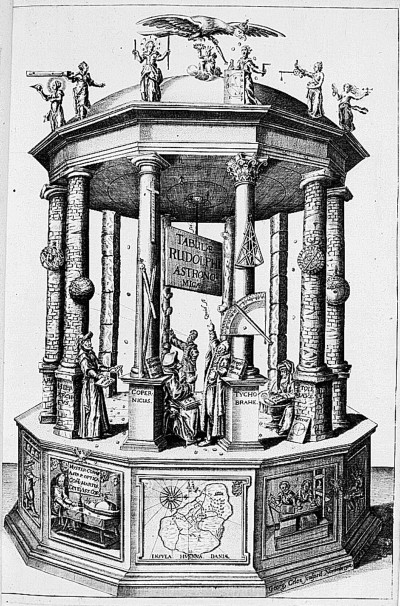 Temple of Urania, Georg Celer's frontispiece for the Rudolphine Tables