WESCHLER: Taking it one step further, I would also argue that this is the moment when art starts being art as opposed to being science. For all of your claims that the old man and the woman should be read principally iconographically — that they represent this or they represent that and so forth — there are times when a cigar is only a cigar, and there is something quite moving about that girl asleep on the lap of that old man—something crying out to be seen not just as a symbol, but as a relationship between two human beings. Thirty years from here you’ll be getting Vermeer with his insistence on the substantive presence of the sitter as a person and not as a genre and not as a symbol, not as a puzzle — not as anything other than a person.
And I think that’s already beginning to happen in a time like this. 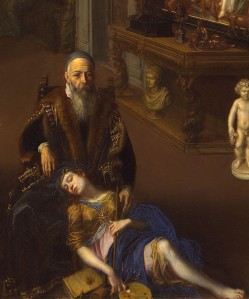 GORMAN: So where does this picture sit in the genre of pictures of galleries?

MARR: Well, it’s interesting in light of the point Ren made about this being a moment when art becomes art, because this genre of gallery interiors is precisely about that. It’s about the moment at which art appreciation becomes a recognized phenomenon, a recognized and accepted thing to do. This particular genre of pictures of collections emerged at exactly the same time that the “liefhebbers van schilderen” — the so called ‘lovers of painting’—were first admitted as a category of member to the Guild of St Luke, the artist’s guild in Antwerp. So it’s a recognition that art isn’t just about making. It’s about appreciating and evaluating and discussing. And that’s really what this genre meant to be about. It’s showing images that cognoscenti could stand in front of discussing differences between style, differences between manner, differences between treatment of themes.

CORDOVER: While I agree completely that this genre of painting—Flemish gallery painting—is precisely as you’ve described it, this work has such striking differences from essentially all the other Flemish gallery paintings that we’ve looked at because it doesn’t have cognoscenti within it and it isn’t principally about a particular collection of either art objects or other kinds of objects—musical instruments or artificialia or naturalia of any sort. It’s about knowledge.

MARR: I think this is essentially a hybrid. Yes, you’re quite right—there are no cognoscenti actually in the picture. I don’t think that that means that this isn’t an image that should be thought about in terms of cognoscenti and appreciation.

MARR: And it is also about knowledge—but it’s about lots of different kinds of knowledge. I think there’s no doubt that knowledge of the cosmos and how the world fits together is a key theme. But I think that we shouldn’t forget that this is also about recognition of the styles of different painters. So I think it’s about—going back to arts and sciences and how they’re allmixed up—I think this is an image about different kinds of knowledge.

GORMAN: You could say the picture is a machine to produce cognoscenti

excerpt from A Mysterious Masterpiece: The World of the Linder Gallery (Fondazione Palazzo Strozzi/Alias, 2009)