Three books can be seen to the right of the celestial globe in the Linder Gallery. From the bottom they are the HARMONICES MUNDI or Harmonies of the World (1619) and the TABULAE RUDOLPHINAE or Rudolphine Tables (1627)  by the German astronomer Johannes Kepler. 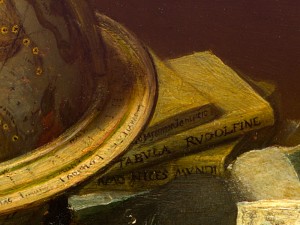 Detail of Linder Gallery showing books by Kepler and Napier

The title of the uppermost book is very difficult to read but it has recently been identified by Paolo Galluzzi as John Napier’s Description of the Admirable Table of Logarithms (1614), which Kepler used in performing the calculations of planetary motions in his Rudolphine Tables.

The Rudolphine Tables frontispiece contains a small portrait of Kepler, and it is possible that the male “Disegno” figure in the foreground of the Linder Gallery is intended as a likeness of Kepler.

Why Kepler? There are a number of reasons. First of all, the books and the cosmic diagrams point to Kepler. Secondly, I believe there is a strong likeness, especially with the portrait of Kepler in the frontispiece of the Rudolphine Tables, apart from the length of the beard. Finally, if a Northern artist was seeking an individual to personify measurement, mathematics and astronomy in the late 1620s, wouldn’t Kepler as Imperial mathematician and author of the most important planetary tables for a century be a highly likely candidate?

Documentary evidence linking Peter Linder or Muzio Oddi directly to Kepler has not yet been discovered. The idea of Kepler being used to inspire the Disegno figure in the painting does not imply direct acquaintance with Kepler on the part of the artist — he could simply have adapted the portrait from the published Rudolphine Tables (though why the longer beard one wonders). It is interesting that Disegno is wearing exactly the same skull cap and tabard (short coat) as Kepler in the Rudolphine frontispiece, which shows him in the base of the temple of astronomy. 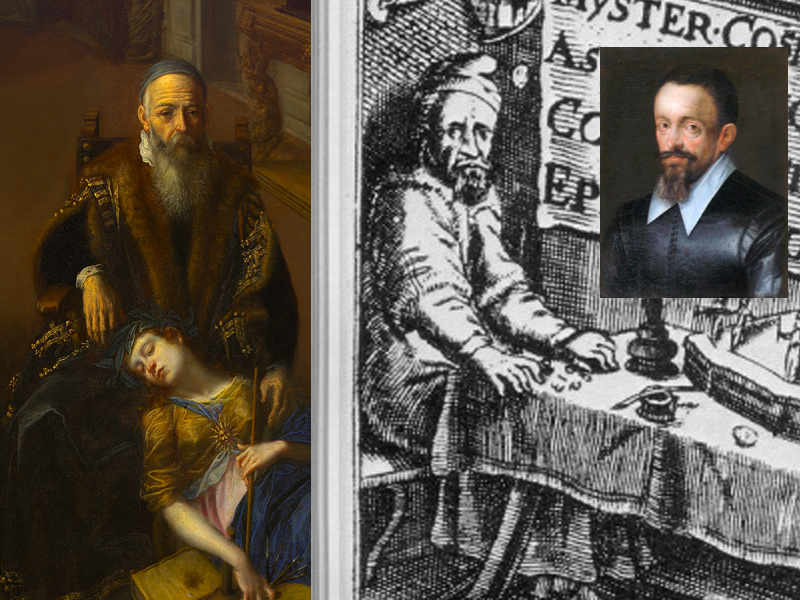